Luminette Review – The Power of Blue

It comes in a sturdy case, which can easily be mistaken for a box of sunglasses. But, zip it open and you’ll find that the contents look quite different.

Very futuristic, was my first thought. At initial glance, the Luminette looks like something out of a sci-fi movie. If you’ve ever spent time in a gaming arcade, the glasses are reminiscent of a virtual reality headset that transport you to cyberspace. But upon closer inspection, it struck me that its design was actually incredibly practical.

The Luminette champions the power of blue-light therapy on the go. Much has been said about the use of blue-light in the recent past (both positive and negative), but in this instance, it is used in an efficient manner to stimulate the effects of sunlight, to activate our body’s positive response to light. And thus, the glasses are there to serve four key purposes:
1. To lessen the momentary fatigue
2. To help speed up the recovery from jet lag
3. To reduce the effects of winter blues
4. To regulate your sleeping patterns / improve the quality of your sleep

These are bold claims, so I decided to put it to the test.

There is a large white frame that covers all of the eyes, and a pair of slim pale blue arms that fit neatly around the ears and alongside the face. Behind the white band is a reflective holographic layer, which allows the blue LED light to reach our eyes. The nose rest is soft yet secure, and an on/off switch sits neatly in the corner.

It’s definitely practical, and completely non-intrusive. Glasses or contacts wearers can get away with using the Luminette as it rests above and over their corrective eyewear; it’s even possible to use it whilst engaging in other light activities, be in brushing your teeth, preparing breakfast, or doing some gentle yoga, as the glasses do not impede on your vision. Perfect, for those who like to multi-task. It is, however, recommended that its use is avoided during strenuous activities, driving, or if contact with water is an issue (definitely don’t shower or go swimming with the glasses on).

As a relatively happy sleeper, who hasn’t been on holiday in a while, I tested the Luminette for its ability to reduce my fatigue during work. I, like many other office-dwellers, often experience the sleepy, post-lunch dip in productivity, so I decided to give the Luminette a shot at 2pm for three days in a row.

With the help of the Luminette app that you can download to tailor your “chronotherapy programme” and blue-light experience to your individual needs, and three levels of light intensity that you can pick from (500, 1,000 or 1,500 lux), it is recommended that you use the glasses once a day for 20 to 45 minutes, depending on your choice of intensity. I decided to go with a happy medium of 1,000 lux for half an hour, working away as I wore the glasses.

I barely noticed the time go by as I wore the glasses, and neither did I feel like I had a device on my face that was pulsating blue light into my eyes. At the end of the 30 minutes, I felt calm but oddly refreshed; I’ll admit, I was sceptical about the device to begin with, but the fact that 3pm rolled around and I wasn’t craving a cup of tea and chocolate to wake me up left me feeling pleasantly surprised. I certainly won’t say that the Luminette gave me the energy to run a marathon in that moment, but I was decidedly more cheerful and happy to continue working past the mid-afternoon slump.

The next two days were no different. The blue-light therapy was making me productive through to the end of the day, and my mood was significantly chirpier, testament of my co-workers who saw me smile through the afternoons! A rarity that deserves mentioning, which only makes me appreciate the Luminette even more. 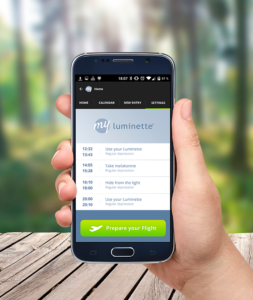 It is the product of four years of inquiry and clinical studies at the University of Liège, developed after much research and collaborative efforts of two physicists and one neurologist, to create a product that combines the powers of sleep medicine and optical physics. Tried and tested, it’s clear that the Luminette works to improve the quality of our waking hours and in preparing us for sleep, but the advantageous effect is merely the first step.

In order to reap the full benefits of the Luminette, dedication is required. It must be used every day (or as per the instructions given on the app once you’ve adjusted it to suit your needs), be charged periodically using its micro-USB rechargeable battery, and be used with the intention of improving your current productivity or sleep status. It seems to me that using the Luminette frivolously would perhaps impact you negatively rather than positively, especially when it comes to regulating sleep patterns or overcoming a bout of jet lag.

And then there’s the price – but it is my humble opinion that if poor sleep is in the way of maintaining a healthy lifestyle, the cost of a Luminette is but a small price to pay to unlocking the full benefits of a productive and rejuvenated lifestyle that you may not be able to access without technological support to your sleep.

Practical, technological, and pretty swanky – it’s all to do with the power of blue with the Luminette.