Home / News / The Sleep Journal / Are You Sleeping Better Than You Think?

Are You Sleeping Better Than You Think?

Like many people, I spent May not getting as much sleep as I maybe should have. As it turns out, worry over my lost sleep might have been the problem, rather than the lack of sleep itself. You might be the same. Actually, if you are, you might be sleeping better than you think.

Do you call yourself an insomniac? A recent study found that people who were convinced they got a bad night sleep felt more tired and experienced more of the negative affects of lack of sleep than people who slept worse but were less concerned by it.

Sleep is important to everyone’s daily functioning. As a result, you would think you could easily tell how well you slept upon waking up? That, as it turns out, is not always the case.

Insomnia identity is a term coined by Prof. Lichstein to be the belief that you suffer from poor sleep even if you are getting a full eight hours. If you label yourself an insomniac, you might be suffering from Insomnia Identity and as a consequence be uncoupled from the good sleep you may actually be having.

It has been considered that this may be a symptom of the ‘rise and grind’ culture of today where lack of sleep can be a badge of honour to show how hard you are working.

Why Is This A Problem?

Insomnia Identity can cause you to worry about your amount of sleep, and its that stress that causes more problems. Those who labeled themselves as insomniacs were found in several studies to be those more at risk for issues associated with poor sleep such as poor mental heath and high blood pressure.

What Can You Do About This?

Being relaxed about the amount of sleep you receive could be your best solution for good sleep health. If you are convinced you sleep badly every night, you won’t be able to benefit from it when you have a good night sleep.

I try and maintain the attitude that whatever you can do is at least better than doing nothing.

Six hours of sleep is better than four, and four is better than two and two than none – though I have heard it jokingly said by that point its not worth bothering to sleep.

Aside from that, one way you could benefit your sleep attitudes is to start of your day well.

If you feel like you didn’t sleep well, don’t dwell on it. Brush off the regret about staying up late, or focusing on the way you still feel tired, and start your day well with a refreshing cup of tea.

The instinct can be to reach for coffee, but it can make you crash later in the day. I have found starting the day with a my travel mug of hot lemon and ginger tea when I leave the house to be soothing and energizing.

Shop our range of teas here 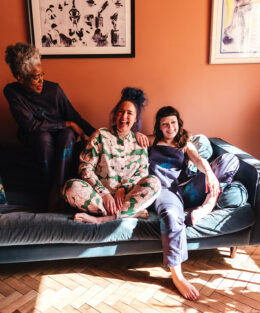 In Conversation With: Wild Clouds